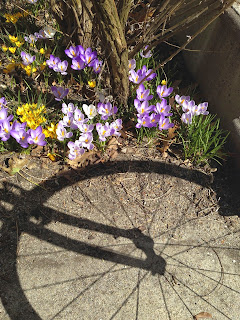 Blog logic requires regular posts to maintain interest, though this never worked here. Still survey issues and write essays, but spending every available hour riding or working to recover from worst winter in recent memory. Crocuses and robins don’t lie, say next generation has arrived. Bike paths provide a way to regain the stamina you need for running roads.

Zipping down a long decline had to brake hard to avoid a toddler walking a tiny bike at a 90° angle to path. Likewise, parents stood sideways astride their own taking up rest of pavement. No harm, no real foul, simply said, “No problem,” to their, “So sorry,” and resumed scorching. While nice every so often to forget traffic, recognize bike paths are bunny slopes and dog walks. When a friend bragged of his urchin taking to 2 wheels like a duck to water, shot back, “Whoa! Set limits.” Tykes don’t know any better than to ride trikes under trucks. Adults must supervise children until they’re ready to go solo or tragedies ensue.

Independent of age, all users of roadnet must know basic traffic code, personal safety protocols, and who to contact for help. Bikes need to be maintained. Pays to check carefully and clean before heading out, or you might wind up unsafely without or worse when far from nest. Trek recalled all bicycles with both front disc brakes and quick release hubs made from 2000 through 2015, which affects almost a million units sold in North America. Lever might jam in disc causing a sudden stop and endangering riders. Facial injuries, fractured wrist, and paralysis have resulted. For details go to www.trekbikes.com and click on "Safety & Recalls" at bottom of page. Who can say how many other makes might be similarly defective? Most are definitely not designed for wet weather. Global warming guarantees rainy days. You can wear a wetsuit but won’t keep bearings and chains from seizing with rust, or frames, handlebars and saddles collapsing from damage or rot.

Despite perceived perils, managed to bike over 100,000 miles alongside truckers with fewer close calls or mishaps than during 500,000 miles driven in about the same amount of hours. While motoring appears 5 times faster, always says that cycling is 20 times safer, walking 8 times, both more practical when trips are short. All cyclist and pedestrian deaths in recorded history do not equal what motorists sustain every year. Yet news neglects to mention this while hammering cycling for comparatively minuscule menace.

Cyclists continually encounter road rage of impatient motorists. Children’s book Ben Rides On depicts the inhumanity of bullies being transformed into bike repair and personal redemption. Ordinarily, Labann steers clear of juvenile literature littered with lessons intended to scare. But cartoonist Matt Davies does an excellent job describing situations to which anyone can relate.

“Any fool will load his bike so much that he can’t see; he rides on sidewalks, so what happens? A catastrophe! ...I play safe for you and me, ‘cuz I’m no fool. Show off is a stupid thing... He thinks it’s fun but what a sorry ending to his show.” – Cliff Edwards and the [Disney] Mouseketeers, 1956

Posted by Labann at 3:15 PM No comments:

In A Sand Grain

With snowless road shoulders still sandy, yesterday’s ride found 6” clear inside lines. That usually means motorists are violating lanes, though some could just be blowback by passing vehicles. It’ll be months before DPW removes, which saves a lot of time cleaning bikes and primping chains. Wondered what they’ll do with all this tainted detritus. Some looks reusable. Have paid serious money for 75 pound bags; only need to scrape and store for next freeze. Saw several flawless shoals nobody might mind seeing someone sweeping. Also found silver coins lost in snowbanks now receding. 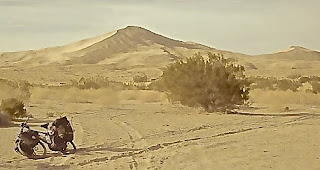 William Blake famously wrote: “To see a World in a Grain of Sand...” The most insignificant things can cause pause for investigations into universal connections. A grain of sand in your shoe may physically irritate. Capitulations to conservative thought irritate learned sensibilities. These whores make a corrupt buck opposing alternatives to today's monetary policy that favors oligarchs. Money is a crucial tool that's wasted on dolts. Corporations only pay 1.9% of GDP in taxes, though some argue that personal taxes have risen to offset. It’s just another wrinkle in that trickle down scheme, a policy failure disproven repeatedly since Reagan begat it in 1980’s. BODs and CEOs never pay their fair share, so middle class earners bear all revenue burden. Bribed legislators exploit suckers with each bill addendum.

Often wonder what to believe. Ludwig Wittgenstein’s On Certainty uses “rider” as an addition or postscript:
607. “A judge might even say, ‘That is the truth - so far as a human being can know it.’ But what would this rider [“Zusatz” = addition] achieve?
624. "’Can you be mistaken about this color's being called green in English? ...‘No’. If I were to say, ‘Yes, for there is always the possibility of delusion,’ that would mean nothing at all. For is that rider [“Nachsatz” = postscript] something unknown to the other? And how is it known to me?”

A comparatively precise language, German for “bicycle rider” is “radfahrer”. Ignorantly trying to mimic Ludwig, Americans demote “a bicycle rider” to an afterthought. Riders are as green as unappreciated leaves, invisible, nothing at all, possibly a delusion, something to ignore or sweep aside, and unknown to stateside traffic planners, though valued by Brits [in this recent official report worth reading] and other Europeans. To Labann it's just a recurrent irritant. For those who say bicycling isn’t as safe as driving, it may be true in specific instances when bicyclists are given no quarter, though overall false, in all 20 times safer considering roads are empty 90% of the time and speeds averaging 12 mph aren’t likely to result in harm unless run over by motorists where shoulders don’t permit cycling.

Terrill Mast, Bike Ride [eam], Bike Ride, self, 2014, was inspired by a dangerous late night spin by bike, which resulted in a fractured arm and a renewed zest for life. “I can never let this be the end. I will do what I can to keep this always on a bike ride outside... I can not tell what is real, check the pulse and I feel... Alive!” Multi-artistic Mast also produced a bike sculpture.

Posted by Labann at 5:44 PM No comments: