Reading web news, began to notice a peculiar perspective that defends its position while recognizing bike culture. One Minnesota blogger tries to reconcile bicycling advocacy with loving petrol stinkpots. Bemused by police in suburban Townsend, Massachusetts (so small it's only intersected by state numbered roads 13 and 119), who annually give $100 gift certificates and helmets to random neighborhood ragazzi they see cycling safely. Thereby deputies hope to control traffic where no interstate exits exist to render impractical. SFGate sports columnist Ann Killion links avid bicycling with baseball icon Barry Bonds, who, as you may know, preceded Armstrong in doping controversy. But, so far, Barry isn't banned from diamond or pelaton. Because Labann has been writing this way for decades, seems significant when others do, too. Isn't evidence of influence, but might inspire continuance. Everything is interconnected. If you want to open a can of universe, a bicycle makes a decent can opener. 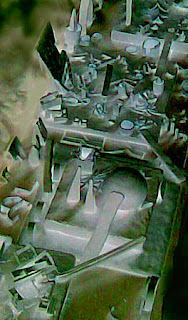 Recent posts equally criticized lax bike and car maintenance. Labann's last ride was straight to the local bike shop for new cables/guides, chain, and handlebar wrap. Also replaced a lost cyclometer with over 75,000 miles logged; popped off one night riding under lights dimmed by hand after motorist flashed his. Yeah, these L&M units are so bright they really do rival automotive lumens. Habitual response, should have ignored. Searched for days in vain. Old friend at shop offered in condolence, "Some kid might find a treasure to admire." Questioned reinvesting in same old Italian over a decade; likely spent as much in repairs, tires, and tubes by the dozens as a new purchase, yet no thief would find it as attractive. Choosing decent equipment, spent hardly any time broken down by roadside. Yeah, a lot of junk is sold despite potholes and tracks galore with which to deal. Get to know a good bike shop; prepare to spend seriously. Beat April's tune-up rush now.

Bike fitting? Should you rely on lucky accidents or work it out the hard way? Have yet to see a computerized spinning device that can measure your performance then compare to actual bikes to find one that perfectly fits you. How things work now, you buy an ill fitting beast, change adjustments constantly and/or contort body to it. This is practical in some senses: Bike breaks in, and you get fitter, learn to handle pain, lose weight, sense what works for you, strengthen legs to hover rather than rest on saddle, and tolerate imperfection you can't escape. Still have an old village bike for those short winter spins to save roadie for better days. Swapping hardware resembles rotating shoes so they dry out between uses.

Only managed a handful of rides all Winter. Reasonably cold here in March, so can't rightly expect to ride longer than a few blocks. Would have commuted at least part way twice a week by bike if not discouraged by record cold and snow. With all its negatives Winter riding offers a chance to experience same routes in totally new ways. Since foliage is gone, you see birds in understory searching out that last red berry, skeletons of buildings left to collapse, and vistas across hills and meadows ordinarily obscured. Furthermore, you maintain what you always intended, not to hide inside, but participate, ride, and stay alive. Some say sitting is the new smoking, by which they suggest society must pay billions for those who can't keep on keeping on.

Posted by Labann at 5:29 PM No comments:

Shocked to read CNN's bold headline, "City Cycling: Road to Fitness, or Accident Waiting to Happen?" Probably an editor's addition, it did attract attention. Read long article, which dispels dangers and suggests enhancements. Many cities have already embraced transportation modes that don't involve toxic fumes. Cycling not only remains twenty times safer than motoring, it represents practically zero risk to others. Author wasn't bashing bicycling after all, but public and readers don't care. Cars will always be too convenient a luxury to relinquish, particularly poorly maintained vehicles with lax licensing, loose steering, scratched glass, thin brakes, and whatever else puts cyclists and pedestrians most at risk. 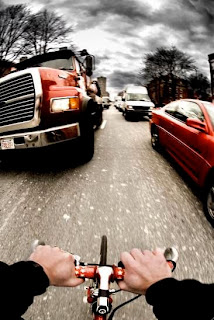 Cycle commuting only works where business opportunities can be had within short distances, cities. In today's chaotic socioeconomic climate, workers have to commute increasingly far, while finding nearby housing can be a terrible hardship if you aren't settling for more than 6 months. Consequently, you have huge highway jams caused by collision cleanups. Got behind one yesterday that abruptly ended with only a crumpled W-beam guardrail in evidence. Since sunset and sunup, when most commute, represent worst times for solar glare and traffic snarl, you'd think that big employers would stagger arrival times.

Nicholas Bakalar's New York Times analysis confirms that top cyclists are not only healthier but look better than you. Another Times article touts nice places to ride in one of the busiest cities in the World. Thanks to advocates as Transportation Alternatives, former Republican mayor Bloomberg did a 180° turnaround to support the half million who were already cycling among the boroughs every day without floods or snow.

You'd think given a chance more would choose cycling in red states with warmer weather. Conservative rag The Atlantic puzzles over why riding is more dangerous in Southern states than elsewhere in nation, or, in other words, where conservative legislators have defied federal regulations and left roads unsafe on purpose, so Big Oil buddies can profit and constituents die as collateral damage. Appears that's where anti-bike strategies succeeded. Comments following feature the usual invectives against cycling. Excuse that motorists are stupid can no longer be used to rationalize why cyclists must suffer. With the slightest official will licenses may be revoked or withheld.

None of this is news. Labann has written about it for 2 decades. Roman's blog of a year ago, Episode 76: The Modern Moloch, cited a 1924 Times article screaming for action against motorists wantonly killing children. After 90 years that added padded dashboards, passive restraints, and seat belts, not much has improved except for urbane chatter meant to keep issues invisible.

Posted by Labann at 7:29 PM No comments:

Running before another predicted storm, found roads relatively empty. After months of driving truck through potholes, slick and snow, enjoyed how much easier it was to bike around asphalt hazards, frost heaves, gutter sand, and plow gouges. Lost rear traction for a moment crossing solid ice, but otherwise went everywhere unimpeded except for pathetic conditioning after a 12 week saddle hiatus.

So out of shape can't imagine ever leading another group ride. Never much liked them anyway. Each cyclist goes at a different pace, so where's the group? Solitary suits Labann: No meet up arrangements, repairs on poorly maintained bikes, or sense of disappointment. Yet a lonesome excursion draws unwanted attention from scary gangs in vans, like Ukraine unrest invites Russian incursion. Frigid rides are necessarily short, deter assault, and leave time to uncover undiscovered culture.

San Marcos Cycling, Share the Road (and 11 others) [Texas pop], Something About Cycling, Kerry Lash, 2013

Posted by Labann at 5:23 AM No comments: