Pick up Companion Reader, 4th [and likely final] Edition, now available for free downloaded by simply clicking on its image on right or title here. It’s been augmented with latest posts, edited for content, and laid out same as Bike&Chain, which it now exceeds in detail and girth.

Labann asks, “I wrote all this? Do I agree with it entirely? Can I endorse wholeheartedly? Who IS this crusader for human rights and social justice? Surely not the easily distracted, instantly frustrated, severest critic of the overly long, pathetically meaningless, and seriously stupid that surpasses even the most ungrudging futility tolerance?” Could claim someone else composed, some gung-ho invisible instigator with poor impulse control who intermittently possesses fingertips on keyboard, surely a brittle bicyclist beaten about by abusive automatons and belligerents with baseball bats and motorized turbo cats. Have never been so clever in person, instead minded own business and roamed withdrawn around society. 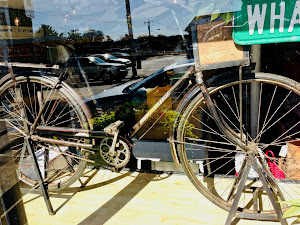 Does it matter whether selective mutism derives from dementia or indifference? Already way past what was originally intended, never meant to repeat self so often, even though withering bicycling does imply repetitive pedaling. Regret sharing 2,000 pages on bicycling culture... dumbest thing ever personally did. No good reason for it, simply saw a hole in society's swing and succeeded in pitching strike after strike for 3 decades. Yet game was rigged; those who outperformed still lost while slackers stole billions and wrecked environment. Although beaten into abject submission, did once rise against cruel domination, and imagine others so inclined. Saw it return and tossed in own two curve balls. But the older one gets, the slower both body and mind; now it’s bullpen time.

Layer upon layer of digital streams and wordy dreams fused into inseparable strata akin to what archeologists encounter at prehistorical sites where habitation existed for millennia, cities built on ruins of villages built on camps along river banks.

If anything, both Bike&Chain and Companion Reader prove bicycling culture not only exists but thrives despite all attempts to eradicate it irrevocably. Automotive interests wanted to clear streets of impeding bicyclists and walkers. Instead they distributed too many vehicles and installed road furniture as own obstacles, so they sit motionless fuming with emotions amidst exhausting fumes, fatiguing billboards, and limiting controls among hundreds of millions of fearfully likeminded. Some motorists are so witless they stop in crosswalks and intersections which they aren’t supposed to enter unless clear to proceed. Then they assault you with verbal obscenities for squeezing carefully around them. From a bicyclist’s viewpoint, it’s a war fought daily in surprising skirmishes pitifully concluded. Hard to fathom how anyone waxes enthusiastic about exercise that punishes more than rewards.

Summer is when automotive lobbyists escalate their anti-bike rant: “Bike right! Get out of my away! Watch out lest you become roadkill!!” It’s tantamount to confessing, “We don’t know what the hell we’re doing yet will never stop, so you better perform extra well to allow for our incompetence.” Presumes bicyclists can while motorists can’t.

Bicyclists retreat to back roads or wooded tracks, along with deer or other wild animals guided by instincts alone, though nowhere is totally safe. Don’t ever call for roadside service, since even though covered for first 10 miles, bicyclists will be extorted dearly for more cash than they carry for any mileage beyond. Drivers fear open spaces between car, home and office, spend <1% of their time outdoors, where they’re statistically safer by an enormous factor, and might soak up oxygen and sunshine for health’s sake.

Meanwhile, insane terrorists spread germs and tamper with unsealed foods and products at points of sale for viral hits. Cybercrooks and scam telemarketers work nonstop to cheat rubes from ready cash. Websites pose as government resources or innocuous portals, then phish for details or identities to steal. Promise of an internet that offers free information to enlighten curious has long been betrayed by greedy businessmen, corrupt politicians, and dastardly predators. Even stalwarts, especially saints, can’t be trusted, because all have agendas against injustice and hate vulnerable you in lieu of unassailable enemies.

So what’s the point in trying to share relevant observations? Only going to attract miscreants or be ignored or misinterpreted by audience you hoped to reach. Nobody believes in friendly, platonic relationships; all mistrust anything different and suspect underlying sexual urges. Seeing world as it is and stating how it disappoints leaves you angry and bitter. Sometimes saying nothing serves you better.

In the end, what you did and you yourself will be overlain by depressing strata. Maybe some future archeologist will dig up your primitive artifacts and find a cherished gem while sifting through tons of wasteland overburden for bits of bone and specks of metal.

“The object of life is not to be on the side of the majority, but to escape finding oneself in the ranks of the insane.” Roman Emperor Marcus Aurelius , 121 -180 AD. Not much changes among men over 2 millennia, but tough to stay balanced when crowded by eight billion among whom two billion are mentally disabled.