"People say I'm crazy doing what I'm doing... Give me all kinds of warnings to save me from ruin... Sitting here Watching the Wheels go round... just had to let it go."—John Lennon, final, posthumously published, song on Double Fantasy album

Why switch back to bicycle from car? Nobody wants to be told how they must go. Motor on days of rain or snow. Why not? Market runs are easier by truck when one can find a parking spot. Bicycling is a healthy choice and mood boost whenever it suits you, or an imposed drudgery for suckers clearing way for tetchy fuel hogs then narrowly surviving falls into trenches. Unfair to call bicycling a gateway drug to driving, but it is all about, "How can we go faster?" without any doubt over consequences. 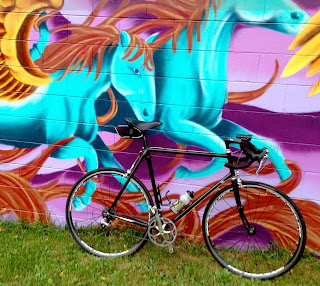 
Though a pain to care for, horses are at least biological, logical, and sustainable and don't need roads, only hay. Neither does a mountain bike, but it won't run off leaving you surrounded by snakes and wolves.

The cheapest (riskiest) form of real transportation might be a 250 cc scooter, which can provide daily 137 mile highway roundtrips at 50+ mph/mpg, 50,000 miles annually, for only 1,000 gallons, maintenance, and oil. A scooter can be used in all weather and costs no more than a decent bicycle, whereas you might have 2 or 3 bikes for changeable conditions but only ride them 10% as far. Some cyclists only use roadies, but half also own either single speeds or winter beaters. During '60's routinely put 2 full bags of groceries, enough for a couple's weekly consumption, into milk rack on back of a waspish Vespa. By bicycle you could carry as much, but not as conveniently in one trip. Frame mounted panniers and racks will set you back hundreds, then you'll need for each bike. Versus fuel, dozens of cassette/chain combos and sets of tires won't match a scooter's range. A luxurious Hermes hipster at $11k costs as much as a low end new car; has some of the features of a Novara Gotham, which sells for 90% less.

None of this takes into account the trillions spent to date on road construction and upkeep. Depreciation is constant. Neil Young twanged, "Rust Never Sleeps." But you can postpone ruin by biking, making pavement and vehicles last longer, running car as least once a week; otherwise, gaskets fail, metal degrades, and seals leak. Bikes similarly suffer unattended: Cables kink, chains seize, tires crack, tubes ooze, though you can remedy yourself with simple tools, no computer diagnostics required. Boats, busses and trains only get you part way to destinations. All have a place in any transportation solution even though underfunded and unevenly valued.

If you hear of a bicyclist killed it’s when run down by a motorist acting negligently. Insurance has become an enabler of bad behaviors. Coverage and lax enforcement encourage motorists to drive obliviously. In a system out of control, assassinations of innocents are inevitable. Policies don’t protect drivers against criminal charges, only property damages. Yet courts ignore survivor civil suits after traffic tribunals give a $75 wrist slap (maximum penalty for taking a life in some states). Every year the burnt offering for finite automotive profits remains tens of thousands of self replicating lives. In an unexamined dynamic, cycling hastens tragedy, and the dual fantasy is a) Doing right by bike will be rewarded, and b) Labor saving technologies won't kill you. Hazards abound in what you choose to ignore.

Why must everyone stay on the move? Against your will, you're forced from home to earn and spend. Helena Norberg-Hodge discussed devastating effect of drone economies. Investment in global rather than local industry leads directly to an erosion of ethics and resurgence of slavery where still allowed. Why isn't hers an indictment of banking practices under Reaganomic deregulation? Farm coops work because produce is perishable. But what of durable goods that easily endure sea voyages and warehouse storage? Manufacturing at point of sale would certainly save on shipping, but billionaires and exporters suppress such thinking. Dr. Stacy Wood points to a hedonic treadmill: One purchase triggers the next in a mindless acquisition chain. Pleasure seeking humans must roam to reproduce with someone other than cousins and siblings. Perhaps mobility over generations has finally smartened them. A third as many 16-year-olds are now applying for drivers' licenses, satisfied with bikes instead. Teens more often communicate and play video games on-line anyway. Anything else desired may arrive mail order, including brides but not blue chimeras except My Little Pony Friendship is Magic.

Posted by Labann at 7:19 PM No comments:

Official statisticians used to say more bikes were sold in 1971 America than ever, 17.3 million, at the height of nation's bike boom. Well, a new record was quietly set in 2000 with 20.9 million. Thought they'd never top with borrowing, rebuilding and renting so popular, yet noticed 15 to 20 million units sold every year since, a stable $6 billion industry. Curious to see tabulated results for 2013. Don't think Big Auto & Oil want these facts broadcast.

They claim bicycles now outsell cars in every European industrialized country, likely true in developing countries, too, where stats aren't as easy to come by. Shouldn't surprise anyone that during a global recession folks will choose a cheaper alternative. But don't kid yourself that ridden miles significantly supplant driven. Motorists report increasingly longer waits at roadnet pinch points, often several red light changes. In fact, private car production worldwide since 1999 has doubled to 60.3 million/year. Last year 82.1 million motor vehicles of all types were assembled; a quarter of them were sold in China. Oil profits have never been greater. Percentage of Americans commuting by bike remains negligible. Only 47 million bikes were built, although their production is expected to exceed cars by 2019.

In this burgeoning bikescape, prestigious blogs and newswires repeatedly ask how safe cycling is. Why spread fear? Sure, ability and savvy peak between years 15 and 60 bracketed by adolescent inexperience and aged infirmity when bicycling becomes less practical. Yet you risk more doing nothing and going nowhere. Huggers must remain mobile to gather, hunt and shop. Restless, you could simply jog or walk, but it takes too long.

Traffic will always be a dangerous dance, though cyclists hug edges, and most roads are empty 20 hours of every day. Still, incompetents may step on toes or stumble; cycling mishaps in America, guesstimated below 200,000 annually, are underreported because they are seldom as baleful or tragic as nation's 4,000,000 motoring collisions. It's why they insure and license operators and pilots and not cyclists, still unnecessary despite regained credibility. Hawaii is the only state with bike registration; Georgia just killed bill in committee endorsed by Republicans but opposed by majority.

One flustered scofflaw snapped back that bike lanes cause accidents based on same argument as guns cause murders: Illogical. As much as they'd like to accuse inanimate objects and loathe assuming responsibility, abusing users are 100% to blame. Laws mandate bike-ped infrastructure because it relieves snarl and smoothes interaction. Motorists, spoiled by freeway speeds, must nevertheless adapt to seasonal frosted windows, solar glare, and variable density on secondary streets rushed at dawn and dusk. Cyclists can't always work around motorists failing to do so.

A bicycling renaissance, if not already occurring, seems on a cusp with avant garde art, film and theater devoted to it and resurgence in urban pacesetters London, New York, and Paris. Bike America, a 2013 play staged in Hell's Kitchen, NYC, tries to elevate cycling into a panacea for emotional emptiness. Europeans just see a bike as a way to get around villages that weren't designed around grids bred to milk motorists. Nilo Cruz's 1999 play A Bicycle Country, about economic sanctions that turned many Cubans into begrudging cyclists, was performed at Miami's Roxy Center last year; Cruz was the first Latino to win a Pulitzer Prize. Follows central London's 2009 staging of Pedal Pusher with plot around Armstrong and Pantani vying for Tour de France glory. Heather McDonald's 1994 play Faulkner's Bicycle imagined the famous author as a cranky cycling neighbor once his writing days were over.