In B&C, “blame” gets 80 mentions, too many. Through commission, omission, or tacit permission of evil transgression, humans are plainly blameworthy, including, though unintentionally, Jesus, in whose name crusaders murdered legions and religious bigots rationalize wrongs. Prefer to remember innocent baby, sole survivor of a genocide aimed at killing him specifically. Today, police shoot unarmed civilians. Soldiers in your behalf resort to sleep depriving and water boarding prisoners. Spent too much time trying to identify who's guilty for today's rage when the real enemies are fear, greed, ignorance, lack of concern for others, and lust for power, as if anyone can really be controlled. Lives are consumed in attempts to establish rules and rectify wrongs, blood feud necklaces strung from one generation to the next, or digging dual graves for vengeance's sake. Why bother recapitulating? Resent feeling fear, so say whatever comes to mind, even if it invites trouble.

Terrorists Labann fears most drive erratically and rudely in huge surrounding vehicles. Filthy, scummy trucks carrying milk or produce turn your stomach. They beg a pair of questions, 1. “How safe is our food and water supplies?” and 2. “Why am I buying these popular brands?” Motoring accidents are the nation’s 3rd worst cause of death, 3 times gun violence or infectious diseases. Plus driving contributes to petroleum carcinogens, sedentary ways, and substance abuse, which are responsible for the top 2: cardiovascular diseases and cancers. Sad state of the roads further leads to erratic behavior by disappointed users. Countless collisions occur from swerving to avoid gaping holes; DOTs don't want to know, because that makes them culpable. Everyone wants to be downtown simultaneously. Work days are already staggered: 5:00 to 9:00 AM starts and 3:00 to 7:00 PM closes. Yet highways range from busy to bumper-to-bumper at all hours, defying logic. With alternative bike commuting up 64% nationwide, bicycling fatalities have risen 16%, though still few compared to motoring, also up 1%, almost as many as bicycling in total. Sobering input deters riding during dangerous December, when revelers and shoppers race around distractedly and drunkenly. Rode 20 miles in drizzle to mail holidays cards that brought hope to honored recipients. Nature dies every Winter Solstice after planting seeds for renewal in Spring. Acutely aware, didn’t need signs in gutter to contemplate mortality. 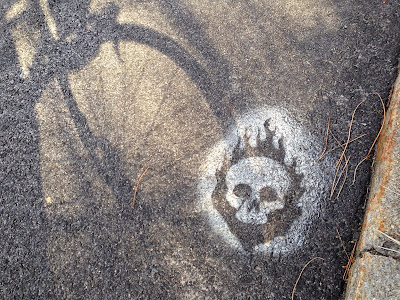 While facts aggravate, befuddle, and corrupt, truth drives humans straight over the edge. Writing will always be an irrational random activity that only the hopelessly deluded believe can be moderated. Epistemologists and scientists with 200+ IQs struggle with the inherent flaws in all communication and literature. The closer you study something, the further away you find yourself from it. You must become the creature or object to comprehend what influences and moves it. Only then can you comment with authority or evaluate such expressions, but often not so anyone else appreciates.

The Library of Congress holds 135 million titles. No group, nation or people will ever read them all. If writers were further funded and motivated, there might be billions. Injustice silences and turns lives into a march of getting, going, spending and sleeping. Surely no such story holds the least interest; only heroes living through extraordinary trials ever present tales one wants retold. Had an interesting eavesdrop at Zurich airport behind a bunch of reporters returning from war ravaged Middle East. Yet writers are usually bystanders who repeat false accounts of what happened, not participants in events readers need to know about. What makes any author think he/she is contributing anything that hasn't already been said? Unless you're creating a future, you’re merely repeating, spinning wheels. Amusing how hacks mimic any book that gains traction. Pulp trash makes good starters for wood burning stoves. Seinfeld quipped, "Why do people keep books like trophies after they read them?" Surely they can be passed around afterwards, so how can publishers anticipate significant sales? Society has gotten so splintered, printing on demand has become popular.

To get a book deal an author needs to gain notoriety and settle into some niche. Publishers dangle carrots for all sorts of donkeys with the hope one plods along in the direction they're headed and therefore shoulders their load. That thousands fail doesn't concern them, only that some succeed who they can exploit. You can't ever be sure how readers will react. A book may take years to produce; nobody has any idea what will sell in 5 or 10 years hence. Can't base a story on what's now popular and carve out a following among those who are looking to be taken somewhere they've never gone before. Can only hope yours resonates with readers at the end of your journey.

Being left on wayside to die when no longer contributing to society makes you acutely aware of pensions and reserves. You'll claw your way to stay ahead. It’s why so few buy art unless convinced it'll increase in value, or freely share their good fortune. Most will never be happy in their chosen career, living through decades in quiet desperation while looking for something they’ll never find. Cannot blame how things are; without taking risks, rewards won't come. Do not regret a stolen decade to pen and publish a book and companion blog nobody reads. What else was there to do? Redouble household projects or take on extra jobs? Sleep or watch more television? Did enough of all to secure some balance, start a train of thought, and stay above board. Can you forgive yourself?
Posted by Labann at 11:40 PM No comments: