As cortège passes to winter’s funeral, calculating next opportunity to commute to work by bike. Dawn already breaks so early, could actually complete entire 2-hour round trip in a blend of day and twilight. But bikeways blanketed by a half foot of snow and road shoulders packed high by plows still prohibit. Slabs of unforgiving ice exacerbate unacceptable motorist risks to bicyclists, who seem restricted this time of year to neighborhood mountain biking or some Sunday morning road outing, maybe. Meanwhile ponder how rise of polarized politics and populace rudeness will impede pedaling in a blue state.

After weeks out of saddle, inner dialogue is bound to deteriorate while muscle mass reverts to flab and gas. Collapse and decay preempt hopeful dreams until leaf buds form and pussy willows swell. Rich fear losing everything, so enact draconian laws in vain attempts at protecting. Thereby, they alienate those who'll do the fighting necessary to preserve their privileges. So, who then is your enemy? How much does your way of life align with theirs? Those who have the most to lose will always be planet’s biggest climate denialists. If you own a casino hotel on the Jersey Shore, global warming becomes too scary a threat to consider real despite documented scientific facts. 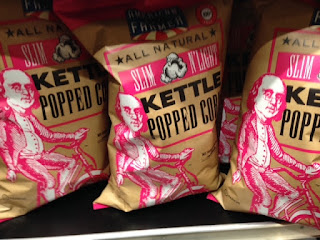 Others might be tempted to anoint Trump the “New Dealer", a knee-jerk handle given his joker name. FDR deserved this honor for social programs that dragged nation from depression resulting from decades of robber baron rule, just in time to fight off Axis aggression. Trump already labeled himself "The Fixer", as if some ace handyman with ass crack and tool belt under Lady Liberty's kitchen sink. The only fixing he's ever done is rigging slot machines and table games in favor of his house; even then he's failed to profit and left devastation of bankruptcies and layoffs for others to clean up.

Danger, Will Robinson! Trump may be an arm waving robot, who speaks in a monotone, as if no complexity of emotion affects his bluster-and-deny programming. A sincere, tragicomic mindset is easily punked. Party conservatives already expressed concern he’ll act like a tyrant and be provoked into another costly war. Impatience never wants to do things traditionally, live in White House, mend fences, or seek compromise. Announcing him by playing Hail to the Chief is out; he never served in military. But any dime store composer could concoct some pompous march to replace. The only thing about him upon which nation can rely is that he will enrich the wealthy at the expense of lower classes, just as he's always done for himself.

With indignant bravado and popped corn rants, he’s announced plans to cure “inherited mess”, but through the same old strategies that never remedied anything, in fact, spawned problems to begin with. Why don't tax breaks stimulate economic growth? Every time congress approved, all they did is grant windfalls to millionaires, silenced wage earners, and skipped altogether the poor, who pay little or no taxes. When they gave struggling families a few hundred dollars it went right into paying interest on loans, so fattened lenders. Dismantling affordable care merely transfers more money into deepest pockets. With recurrence of such token scams, wealth disparity, root cause for most wrongs, hasn’t decreased in 4 decades.

Reaganomics and savings schemes like 401k and IRA turned bankers and CEOs into powerful enemies. Record profits did not translate into job growth. Trickle down has not only failed, but increased public debt to $20 trillion; only what you owe has grown. Since banks are required for daily transactions and companies as providers of basic necessities, government ought to intensify regulatory oversight, not relax. Instead they leave it to largely ignored and typically underfunded consumer watchdogs and nonprofit informants. Congress should indict greed and recover pilferage from national treasury, but many members were complicit, particularly your typical conservative phony. Paying taxes going forward rewards their incompetence and theft. Citizens should expect more from governance or recall representatives.

As previously discussed, politics is a sanctuary for malignant sociopaths, who could never hold any responsible position that requires intelligence, skill, stamina and tact. Tried to advise him that being president wouldn’t fulfill his lust for power. Senate runs nation. All decisions are supposed to pass through filters of anti-discriminatory logic, 4 freedoms, and US constitution. Seems lately Congress has dispensed with all that, instead acted in self interest. A hallmark of emotional adulthood is taking neither blame nor credit for outcomes, because many hands achieve results and fulfill promises. Not at all entertaining, he’s downright frightening. Proves that chief executives ought to pass civics tests, health exams, and personality screens before being allowed to run. However, tempests with thunder and trumpets terrify pets and sheeple, not stalwart people.

Trump’s election represented nation’s repudiation of conservatives and liberals, Democrats and Republicans, and seated representatives, none of whom has done anything in the best interest of constituents in decades. But did sending this message backfire? Set up a fast track to fascism. First he negates careful plans and diplomatic solutions. Xenophobic paranoia spread by personality disorders sorts everyone newly arriving or passing through into criminals or terrorists. Long time green card holders who hold responsible jobs have been detained after visiting families in Moslem countries. Gestapo immediately attacked gypsies and other migrants, because they could slip their grasp and thumb their noses at freakish control fetishes. It’s not doing wonders for tourism, the very industry from which his billions were derived.

Nature abhors and abuses uniformity, white supremacy, yokels with local pleonexia, and zealots aimed at domination. Diversity is a survival mechanism for the human species. Lots of cultures coexisting creates lots of job opportunities. City dwellers understand, so didn't vote for Trump. Foreign nationals do represent problems, for example, arriving ill equipped so requiring welfare, sending earnings back to homeland, taking jobs from citizens, and whatnot. These merely mean enforcing existing laws and handling cases on an individual basis, something citizens expect some government agency to do after paying trillions in taxes and which has always been handled through American ingenuity. The best and brightest doing battle retreat to their corners for a time out trying to sort it all out. Threats of reprisal only handcuff and imprison them ideologically. In world’s most competent, richest, and smartest country, succinctly state what really vexes, and solutions will undoubtedly come forth from those who actually do everything. Leaders never resolve anything, residents do.

Posted by Labann at 4:47 PM No comments:

As always, had to release another year of musical attacks. Any list trailing previously mentioned 2016 song La Bicicleta by Shakira has to exhibit matching bump and grind, so don’t disappoint. Endless sex and gets exhausting, not to mention the stench. Highlights? Bizarre retro theme from Song a Day, and the surprising raw talent of duo called Bicycle, not to be confused with same named 90's pop band. 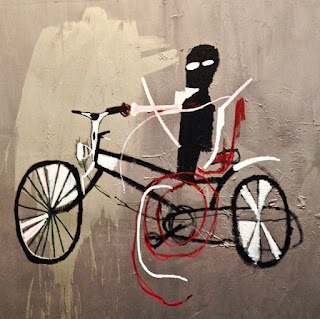 Because only surface sells, artists who don't groom or show low appeal at start often languish in gloom. Likewise, authors so despise marketing selves they'll write for free or stifle their voice rather than prostitute talents. Their drive to secure fame steadily relents after being repeatedly fingered with derision and sniggers. Most read nothing anymore but headlines and twitters. You can shut up altogether or stay your course, but unless you produce daily your abilities wither. Either way you'll be maligned and misinterpreted as everyone paints their own intentions into your delineations by number. Perfectly lay it all out, whatever you say will get obscured under layers of graffiti as if newsprint facts beneath an uncouth Basquiat outburst (shown, The Bicycle Man, 1984). Consider yourself lucky if you find some soul to travel alongside at least part of your way, because earthbound everything, relationships especially, are subject to decay.

Parks, Squares and Alleys, Bicycle, Against Illusions and Reality, self, 2015

The Trip it is, French Girl Sets off on Fifties Bicycle, Ten Thousand Things, Trip, 2016

“Well, I'm so tired of crying, but I'm out on the road again… You know the first time I traveled out in the rain and snow, I didn't have no payroll, not even no place to go… Don’t you cry no more, ’cause it's soon one morning down the road I'm going… But I ain't going down that long old lonesome road all by myself… I can't carry you, baby. Gonna carry somebody else.” Canned Heat, On The Road Again, 1969

Posted by Labann at 9:50 PM No comments: