Who's delusional? Most people believe in angels guiding actions, demons stealing salvation, and such unproven otherworldly nonsense when all evil done by men can be blamed directly upon their own fears, hormones and ignorance. Despite awareness of these needless reactions, ill will nevertheless persists. Those who don't get it radicalize those who once did. Individuals alone generally don't know much, and when they do they're dismissed as weirdos, hunted down as heretics, or otherwise ostracized. Even a work as scholarly as Bike&Chain has been falsely attributed to crack habit, like so many songs by recent artists who expressed emotions exacerbated by downers, psychedelics, and uppers, as if those sensations were not authentic human experiences. A book slowly written over decades does appear randomly compressed presented all at once, as would crap through a compactor. When you look inside your own mind, one outcome of monotonously pedaling, you might find an undiscovered universe. Most people don't want to hear about it, prefer you keep it to yourself, and rather spend time being entertained or stashing cash. Amusement and survival do seem intertwined at certain stages of life.

History's revered authors all created worlds unto themselves then found hooks to involve readers in their fantasies; how is this not complete manipulation? These include all the prophets upon whom religions were based, although they left writing to followers. They assuredly provided an ethical foundation upon which to build civilization, when it never occurred to majority that caring and sharing are simply more practical, although less efficient, than pillaging and raping. Yet religion remains the foremost excuse for carrying evil forward, forcing bizarre opinions upon others, and getting ahead at their expense. Preaching propaganda beats abiding blisters while digging ditches. Books almost write themselves, but motivations remain recondite. Desire for admiration or love, need to feed ego, urge to exert control over chaos seem just as compelling as your search for an elusive revenue stream, the only impulse that most people consider honorable. Writing to feed your kids rates higher in social acceptability than doing nothing, maintaining virginity, and pursuing zero population growth, which is how monks and nuns conduct their entire puzzling lives. Even though evangelists didn't work for pay, these days if you deign to write for any other reason it's deemed as beneath your dignity and viewed suspiciously. 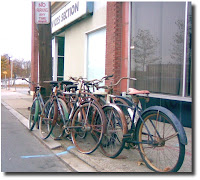 Wonder whether that's why artists are so wretched. They perform actions, produce objects, or realize installations directly from ideas arising from their inner universe, something utterly spiritual, yet seldom garner credit. Mostly they toil alone struggling to be unique then wind up dead from overdoses and suicides before fame finds them. Bikes, frames and wheels have sometimes been used as raw material, or cycling itself inspires. Easier to catalog songs than write paragraphs on other art forms, yet you can't purport to survey culture unless you cover all genres.