Following famous titles from the late 19th Century, notably A Wheel Within a Wheel: How I Learned to Ride the Bicycle (1893, 104 pp.) by WCTU’s LGBT leader Fanny Willard, one might be led to believe books on bicycling for girls are few and slim. Prejudice against suffragism persisted into the 20th, characterized by that wicked witch on a bike in The Wizard of Oz, whirled disparagingly from Halloween and Sapphic themes. Often hear it deemed evident that female interest has renewed in the 21st. Probably has to do with same old issues: Limited opportunities, stifling paternalism, transportation hardships. Would never imply women need a “what to wear” guide or whatnot. Generic books about bikes could suffice for every gender and orientation, but shrewd to pander to distaff half who buy more books and won't be denied. 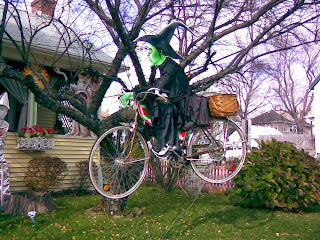 UK's Guardian newspaper ran an on-line article asking for comments on cycling in children's books only to conclude there aren't many, although that's not al all true with hundreds on everything from safety concerns to youth motocross. Since juvenile titles are even slimmer, only listed books from the last decade with a Lexile measure above 800.

Sue Macy, Wheels of Change: How Women Rode the Bicycle to Freedom (With a Few Flat Tires Along the Way) (National Geographic Children's Books, 2011, 96 pp.); nominated for and won several awards.

Selene Yeager, Every Woman's Guide to Cycling: Everything You Need to Know, From Buying Your First Bike to Winning Your First Race (NAL Trade, 2008, 320 pp.); substantial volume probably still shy of pretensions.